Mardi Gras Man, filmed in Hampton, to be screened in Kill Devil Hills 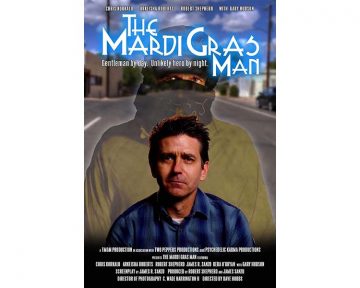 The film The Mardi Gras Man, following its world premiere at the American Theater in Phoebus, VA on Friday Jan. 13 is scheduled to show at 7:30 p.m. on Jan.27 and 28 at the RC Theatres in Outer Banks.

The movie was filmed completely in Hampton and Phoebus in about two and a half weeks. The cast and crew come from the seven cities which comprise Hampton Roads. The screen play was written by James R. Sanzo, and this is the third film produced by Sanzo and Robert Shepherd. More info can be found at IMDB.com.

This is a quick logline, or brief description, of the film. “Trying to maintain the love of a less than faithful wife, James Holloway finds himself locked into the protection of a beautiful female police officer. Along the way, through many close calls with danger, his diplomatic presence wins the respect and friendship of those whose lives he crosses.”