Supt. Basnight on the issues facing our schools and his unlikely return to Dare County 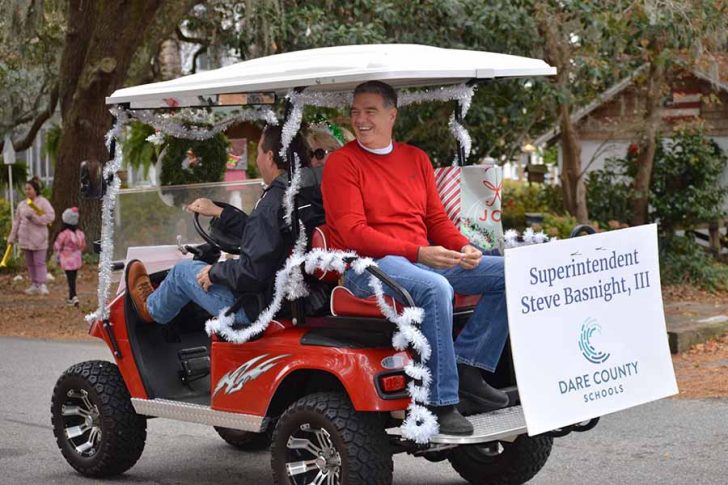 Steve Basnight says the circumstances that led to his selection as Dare Superintendent as “mind boggling.” (Dare County Schools)

The November 2 selection of Steve Basnight as Dare County’s new superintendent of schools marked a homecoming for an educator who had spent nearly three decades in the Dare Schools system before moving on a decade ago to continue his career in Currituck and Hyde counties.

The decision to apply for the job, which Basnight acknowledged was a very difficult one, came after a series of dramatic, and in some cases, tragic events. Two days before he retired as Hyde County Schools Superintendent on March 31, Basnight learned that his mother Carolyn had suffered a very serious stroke. Less than a month later, while driving with his father, Steven Jr.—a former Dare County Schools Superintendent himself—to visit his mother, an accident claimed his dad’s life and put Steve in the hospital with serious injuries.

Basnight had signed a contract to do educational consulting with a Wilmington NC-based company and had concluded that the educator “chapter [of his career] was pretty much done.” Then Dare Schools Superintendent John Farrelly made the surprise announcement in May that he was leaving that post.

Basnight called the suddenly changing Dare superintendent situation “mind boggling. I never thought there would be an opportunity” for him to achieve his longtime goal of heading up the local school system.

He recalled that after the Farrelly announcement, “people here started coming up to me in the grocery store, walking down the street [saying] ‘Listen, I hope you’re gonna put your hat in the ring.’” He said the decision to apply for the superintendent job at a point when he already considered himself retired required “a lot of prayer, really a lot of prayer.”

As he recounts, Basnight completed the job application and paperwork “right at the deadline.” The rest is history. “I was completely at peace, no matter which way it went,” he said of his selection. “I would not have applied for or considered any other superintendent’s position but Dare.”

In a wide-ranging Feb. 20 interview with the Voice, Basnight discussed a number of Dare Schools issues — ranging from student performance and virtual learning to empowered parents and staff recruitment.

Main priorities for the new superintendent

Asked if he had identified the main priorities of his new administration, Basnight responded that “The true answer is, no I haven’t. Dare County Schools has been a beacon in academic performance for years.” In terms of factors like student engagement, teaching skills, resources and community support, “all of the things that say we should be the top are here. So why aren’t we?”

“I don’t think Dare County Schools [are] where we should be,” he added, acknowledging that he hasn’t yet figured why that is the case.

While noting that he will soon have some student performance grades and mid-year elementary school checkups to evaluate, Basnight stated that, “I’m trying to get in the classrooms and watch what’s going on and learn what they’re doing from what they’re showing me…I don’t see this position as a superintendent like an ivory tower. I see it as a resource for a teacher in the classroom. My goal is to find out where the struggles are, find out where the challenges are, then find resources with our staff here to directly provide for that principal or that teacher in the classroom so that they can achieve what I know we need.”

The new superintendent stressed that the traditional concept of “teaching to the middle,” with the overall class average as the key metric, is now obsolete.

“You’re going to get the middle, but there’s a whole lot of kids that go from the middle to the periphery. And we need to teach every kid…So if they’re teaching to the middle, they’re literally leaving out potentially sixty percent of the population of the classroom.”

Teachers are now being evaluated on how student does, he continued. “They can’t just teach to the middle. They’re being held responsible for everybody.”

The impact and lessons of COVID

When assessing the impact of COVID on learning, Basnight offered the view that “I think there’s a benefit,” most notably a wake-up call about technology and teach in a virtual learning environment.

“We had talked for years about teachers using technology,” he said. “COVID showed us it wasn’t happening and pushed us into having to do what we had talked about doing.”

Before the pandemic, Basnight had begun working on virtual learning techniques. When he served as principal of the J.P. Knapp Early College in Currituck,  he said “I really started experimenting with the ideal of virtual learning before it was called that.”

If school got cancelled for a day in Currituck County due to weather or other circumstances, Basnight explained that teachers would email kids with their assignments. “We created the expectation in kids [that] even when Currituck County doesn’t have school, you do.”

When he moved to Hyde County to become superintendent of schools there, Basnight said that knowing that flooding and storms could close schools, “we were working with the same [virtual learning] things. We had those things in place right before the governor closed schools,” due to the pandemic in March 2020.

Basnight is also adamant that reliving debates over COVID is not the way forward. “I’ve told our staff…that we’re not going to use two phrases in this building – COVID and learning loss,” he said. “We can’t do anything about either one of them. We can talk about them all day, [but I’ve] never known anybody to go back in history and change it.”

Basnight confirmed that teacher recruitment and retention is an issue in Dare County “just like it is everywhere else…In Hyde County, [the problem] was getting people to come there…People apply to come to Dare County, but they can’t afford to live here.”

He cited the shortage of affordable housing in the county, noting that “everything here costs a little bit more money”— including gas and food.

And if schools do try and raise those salaries to become more competitive, he pointed out another issue: “You’re going to have custodians making what beginning teachers make.”

Polarizing education issues in the schools

Basnight was also asked about the increasingly polarized debate over public education issues that has arisen in the COVID era. Disputes over COVID school policies, such as masking, as well as campaigns against the teaching of Critical Race Theory (CRT) and Social Emotional Learning (SEL) have transformed some Dare Board of Education meetings into scenes of anger and protests.

Questioned as to whether he expected those tensions to continue and impact board of education meetings, Basnight said, “My crystal ball is really foggy, because I don’t know. The [COVID] masking issue sort of drew the line in the sand — and you were, or you weren’t…I think, at times, there wasn’t a lot of two-way conversation on the issue.”

“In my mind, parents should be involved in their child’s education” he stated. “I think there have been times in the past when you couldn’t get a parent to come to a parent night, much less a board of education meeting. So I do expect maybe an increased involvement by parents, but that’s not a bad thing. I want to work with parents to provide their children with the best education.”

“Things like CRT and SEL have taken a life of their own, which may not have been what was intended when the subject came up,” he added. “Those are separate issues…”

A new board of education

As he begins his stint as superintendent, Basnight will also be working with a Dare County Board of Education that was significantly altered by the fall elections. Three incumbents chose not to run for re-election and were succeeded by three newcomers—Dan Payne, Barry Wickre and Matt Brauer. Payne and Wickre were then elected as chair and vice-chair of the new board by identical 4-3 votes.

Basnight was asked whether he expected either a new direction from the new board and whether the 4-3 split on the leadership votes signaled a significant schism on that body.

“A lot of board reaction, a lot of board direction comes from events that really take place outside of the board. If I could predict the kind of issues that are going to be put in front of the board to address, I may be able to answer that question,” he said.

But Basnight also added that thus far, “from what I’ve heard from the board members, they’re willing to work for consensus and I’m willing to help them” work toward it.