Our number one priority is workforce housing 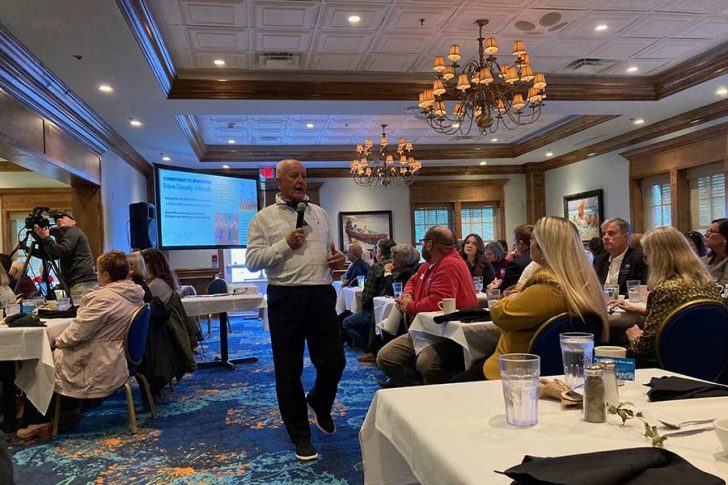 Chairman Woodard walks among the audience during his State of The County presentation. (Credit: Mark Jurkowitz/OBV)

In a roughly one-hour State of the County presentation, Dare County Commissioners Chairman Bob Woodard alternated between exhortations and congratulations. But he seemed at his most passionate when talking about the county’s frustrating quest to generate several hundred units of essential and workforce housing.

“The number one priority for us is essential and workforce housing,” he declared, adding that that effort has been “difficult.” And in an apparent reference to the local opposition that stopped proposed housing developments in Nags Head and Kill Devil Hills, Woodard asserted that “This is critical…Don’t let the naysayers shoot us down. We’ve missed opportunities.”

The State of the County presentation, delivered at 9 a.m. on Wednesday, Jan. 25 before a packed house at Captain George’s Seafood Restaurant in Kill Devil Hills, featured Woodard, as is his style, walking throughout the audience during his remarks, stopping by various officials and attendees to address them directly when the subject at hand involved them.

Titled “Caring for Our Community—A Nurturing Place Where All Can Live and Grow,” the address was divided into five priorities. First was essential housing followed by beach nourishment, maintaining Dare waterways, education and combatting substance use and the opioid crisis.

In an additional touch that was greeted warmly by the audience, for each of the five topics, Woodard handed the mic over to a Dare County resident to discuss how he or she was affected by the issue, and their remarks elicited several standing ovations.

During the workforce housing discussion, Rossi, who moved to the Outer Banks from Ohio, said she currently lived in teacher housing but would soon have to find a new place to live because of rules governing how long teachers can stay in those units. “I have tried to do a lot of side jobs,” in the hopes of being able to afford to buy a home, she said. But “a lot of the mortgages are more than I make in a month.”

“If she doesn’t get housing, she’s gotta get out of here,” Woodard declared. “She’s teaching your kids, for God’s sake.”

Woodard explained that while the county’s near-term goal is to build 400-500 new units, in reality, about 2,000-3,000 units are actually needed. And in another reference to some of the community opposition to recent proposals, the chairman took aim at what he considered some misperceptions floating around.

“It is not subsidized housing or Section 8 [housing],” he said, his voice rising. Instead, he said, the units are designed to be affordable for those earning between 40%, 60% and 80% of the AMI, or area median income, which is about $69,400 for a family of four in Dare County. The estimated costs of the rental units, including all related housing expenses, would range from about $900 to $1,800 a month, he noted.

Pointing to the $35 million in state funds earmarked for the county workforce housing initiative, he added that “We cannot afford not to take advantage of that.”

“That’s our economic engine, folks,” Woodard said, noting that in the past decade, more than $225 million overall has been spent on beach nourishment in Dare County.

On the topic of maintaining waterways, the chairman lauded the $15 million “public-private partnership,” that brought the Miss Katie Dredge to Dare County in August 2022 and placed its operation in the hands of the Oregon Inlet Task Force—facilitating local control over dredging decisions.

“We had to find ways to make this happen,” Woodard asserted.

Discussing the county’s commitment to education, he cited the $22.8 million the county contributed to the Dare County Schools for FY 2022-2023, noting that those funds represented about 38% of the district’s school budget.

Among the other 2022 educational initiatives cited was the opening of the new $18 million COA academic building in Manteo as well as the $250,000 per year in Dare Guarantee Scholarships the county hands out to allow students to attend COA full-time with no out-of-pocket costs for tuitions and fees.

Thus far, more than 170 of those scholarships have been awarded, Woodard said, while making the case to expand participation in the program.

The final priority discussed by the chairman was the county’s fight against substance use and the opioid crisis.

The chairman  reviewed the creation of the Saving Lives Task Force in 2014 and pointed out that the county will receive $3.4 million dollars over the next 18 years to combat the opioid crisis as part of the national $26 billion dollar opioid litigation settlement. In FY 2023, that amounts to about $420,000 to be used on everything from a new local overdose response coordinator to a major public awareness campaign.

In addition, Woodard pointed out that the county contributed $200,000 toward the $6 million expansion of Dare Challenge, a residential substance abuse rehabilitation center located in Wanchese. He also discussed the creation of the Dare County Recovery Court in 2019, a program designed to rehabilitate, rather than incarcerate, people facing drug-related criminal charges.

There are currently 40 people in the program, and Recovery Court graduate Autumn Price, whose substance use problems led to homelessness and her children being placed in foster care, told the audience how the court had turned her life around, producing one of the morning’s standing ovations.

In concluding his remarks, Woodard acknowledged that “We’ve got a lot of issues facing us.” But he added that “I could not be more proud to live in a county such as ours.”