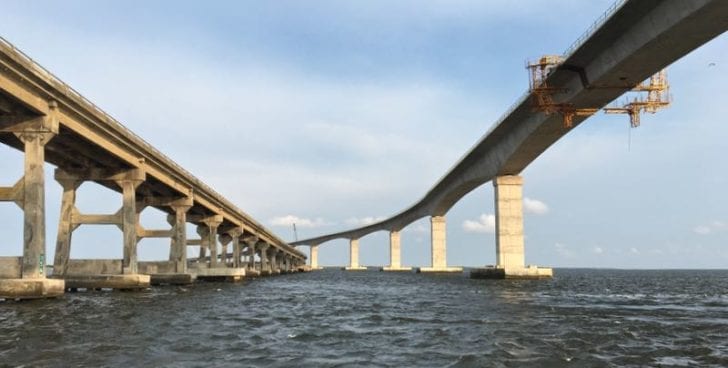 The old, left, and the new, right. (Rob Morris)

Widget not in any sidebars

Dare County wants to know what people think about a new name for the new bridge over Oregon Inlet after Commissioner Ervin Bateman suggested this week dedicating it to former state Senate President Marc Basnight.

Bateman, a former Kitty Hawk town councilman, said at Monday’s board meeting that “the name Marc Basnight has come up many, many times.

The board decided to put the question out to the public and revisit the idea next month. Commissioners can pass a resolution and submit it for approval by the state Board of Transportation.

Dare’s website is offering a survey and a form where you can submit ideas for names and the background of the person you would like to see honored. Check here to make a suggestion and read about the process for naming a bridge »

Up in the air is whether the process can be completed in time for the formal dedication of the bridge, which Chairman Bob Woodard said is now scheduled for March.

Commissioner Steve House suggested continuing to honor the man the old bridge is named for, Herbert C. Bonner, by naming the stretch of the span that will remain as a fishing pier after him or putting up a historical marker.

Basnight served 26 years in the state Senate — the last 17 as president pro tempore — and arguably became the most politically powerful man in the state before Republicans rose to dominance in 2010. He resigned in 2011 for health reasons.

In a September Outer Banks Voice story on the new bridge, the overwhelming choice of readers’ comments was to just keep it named the Herbert C. Bonner Bridge.

The next most popular suggestion was call it the Oregon Inlet Bridge, followed closely by naming it for Basnight. Several suggestions were made to combine the Bonner and Basnight names for the bridge.

There were a number other names proposed by readers, including infamous pirate Blackbeard, actor Andy Griffith, and Toby Tillet, who operated the ferry that ran across Oregon Inlet for 25 years before the original Bonner Bridge opened.

And a few suggested giving the new span a new name, while keeping the Bonner name on the 1,000 feet of the south side that will be converted into a fishing pier, while the rest of the old bridge is demolished.