Rep. Paul Tine goes unaffiliated, will caucus with the GOP 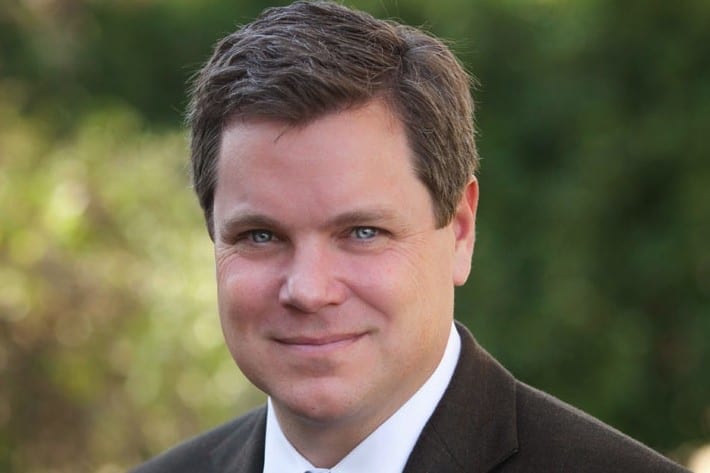 State Rep. Paul Tine announced Wednesday that he is leaving the Democratic Party to become an unaffiliated voter, and hopes to caucus with the Republican majority when the General Assembly convenes the 2015-16 session in Raleigh later this month.

“This has been a difficult decision as I have been a Democrat since I first registered to vote,” said Tine in a press release.

“The majority party in Raleigh has said they will make room for a more moderate approach and I look forward to continuing to be this voice in Raleigh,” Tine said. “I have always been and continue to be a centrist that puts my district and my state first.”

Tine had planned to make the announcement Monday, but word began to circulate in Raleigh and locally that he was making the change, and led to him issuing a press release Wednesday evening.

It is a rare occurrence in North Carolina for members of the legislature to switch parties while in office, although not unprecedented.

The News and Observer reported Republicans are expected to decide Friday on Tine’s request to join their caucus. If so, he would give the GOP a 75-45 majority over Democrats.

“First and foremost, this is the right decision for our district,” Tine said. “We have major issues concerning transportation, education and insurance in the east. Our region’s economy continues to lag behind the rest of the state and I cannot allow party affiliation to stand in the way of getting work done.”

But he insisted he will not change his stance on public education, early education, Medicaid expansion and rural issues.

“My hope is that working inside the majority will allow me to get more accomplished in the next two years,” Tine said.”

He noted that the decision was based on political philosophy.

“My voting record and my message have always shown that I am a fiscal conservative who believes in a common sense approach to making our district and state a better place,” Tine said. “These ideas have become increasingly less welcome in the Democratic Party over the past several years.

In his statement, Tine expressed he would be willing to be a bridge between the two parties on Jones Street.

“I will continue to work across the aisle to do what is right for eastern North Carolina and the state.”

Tine defeated Republican Mattie Lawson in each of the last two elections, including a 53 percent to 47 percent victory last November.

Rep. Tim Moore, R-Cleveland, who is expected to be elected the new Speaker of the House, told WRAL-TV that Republicans did not explicitly offer anything to induce the switch.

“Him being a returning member, I would certainly look to put him in some committee chairmanship, but no, there’s been no promises or anything like that,” Moore said.

Tine also said in an interview with WRAL-TV that no offers of were made, and that he only met with the GOP leaders recently to discuss specific issues.