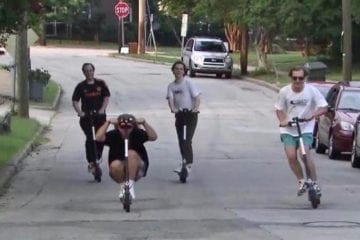 The scooters showed up in Raleigh in July. (WRAL)

A fast-growing trend that started on the West Coast will not reach this far east yet, at least not in Nags Head, where commissioners passed a ban Wednesday on electric scooters offered by ride-sharing companies similar to Uber and Lyft.

Mayor Ben Cahoon raised questions about the business practices of companies that place fleets of the scooters in areas with no notice and make them available through smart-phone applications.

Several cities have pushed back to demand payment of local business license fees as well as better assurances of liability protection and regulations.

Since the companies are Internet-based, they have no local offices.

Riders rent the scooters by locating and starting them through the app, which records the amount of time they use them. Rates are generally a flat fee of $1, plus a per-minute charge.

Freelancers then round them up, recharge them at home and are paid by the company per scooter that they collect and redistribute.

“The problem is that their business model now is to drop the scooters without any prior discussion into a community and force the community to use its own resources to figure out what the rules need to be and clean up the problem,” Cahoon said.

Nags Head, he said, might welcome the scooters if the companies would consult with the town first.

“But that’s not what they’re doing, and they’re not going to change that model, apparently, unless they’re forced,” he said.

The Virginian-Pilot reported Wednesday that the city of Norfolk has impounded about 400 Bird scooters in the past month after they began appearing in the area. The city has tried unsuccessful to set up a meeting with Bird officials to work out a “regulatory framework,” according to the Pilot. 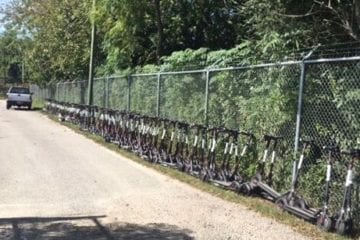 Nags Head’s  Planning Board, during a discussion last month, saw several drawbacks if a company decided to place scooters here. For one, they would not be allowed on the multi-use path under an existing ordinance prohibiting motorized vehicles. With top speeds of 15-20 mph, they could be a hazard on the beach road or bypass.

Most of the scooter ride-sharing so far is in urban areas where it is marketed as a way to reduce pollution and traffic congestion.

Bird, started by a former Lyft and Uber executive, was launched in the Los Angeles area last year.

Bird’s website includes a link to “Become a Charger” and earn money to round them up.

Santa Monica cited the company for failing to obtain a business license, among other things, according to The Los Angeles Times. A $300,000 settlement was reached and the company continues to operate there under a pilot program that includes annual fees per scooter.

Mackenzie Long with Bird public relations said in August the company had no immediate plans to launch in new areas.