Flooding recedes, cleanup begins as Michael speeds out to sea 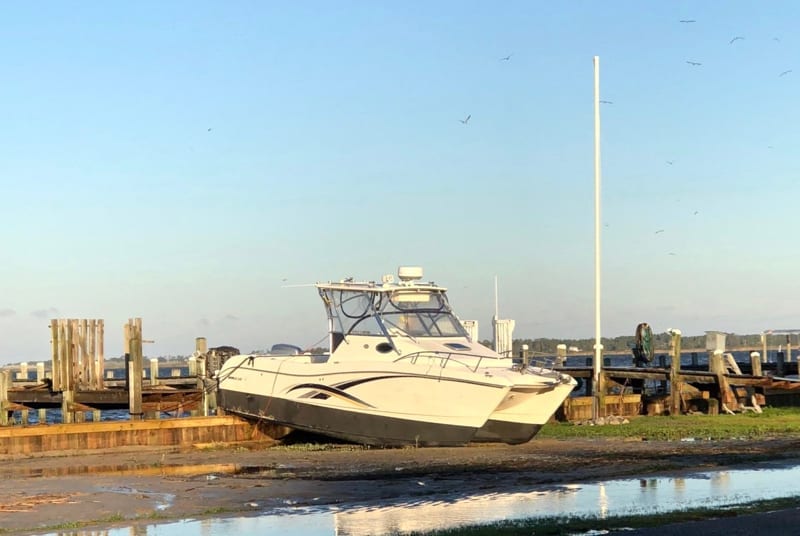 Nearly 2,000 remained without electricity Friday morning in Dare, Hyde and Currituck counties after the remnants of Hurricane Michael howled through the Outer Banks, bringing down trees and power lines and causing major soundside flooding from Hatteras to Currituck.

In Kill Devil Hills, a state of emergency was declared as officials assess and begin cleanup from flooding and outages overnight.

Colington was hit particularly hard, with flood waters reaching 4 feet before beginning to recede as Michael swept out into the Atlantic Ocean near the Virginia line.

Town officials advised residents and visitors to stay inside this morning as they assess damage and begin cleaning up.

”There is debris along roadways, propane tanks floating in stormwater, and snakes that have come up with the sound,” the town said.

Just south, the U.S. 64 Manteo-Nags Head causeway reopened to travel in both directions this morning after being closed due to flooding and downed power lines overnight.

Nags Head officials asked travelers to use “extreme caution” due to debris on the road.

“Watch out for standing water and debris on streets vulnerable to soundside flooding,” town officials said in a news release.

Nags Head offices opened on time today and there was no change to the sanitation schedule.

N.C. 12 through Duck was closed overnight, but reopened as of 7 a.m.

Schools in Dare and Currituck counties were closed Friday. The Dare County Clerk of Courts office planned to open at 11 a.m., and District Court scheduled for today was also set to begin at 11 a.m.

There will be no residential trash collection in Rodanthe, Waves, Salvo and Avon today due to water on roadways. Commercial pickup will occur as planned, contingent on water in the roadways.

The National Park Service visitor facilities at Cape Hatteras National Seashore are opening at noon today, but officials noted some off-road beach routes may be impassable, particularly at high tide.

The threat of rip currents remains high in the Atlantic Ocean and visitors are “strongly urged” to stay out of the water.

NCDOT ferries all plan to run on regular schedules today.

Sustained wind speeds overnight were more than 45 along the Outer Banks with gusts nearing 60 mph.

The storm made landfall around midday Wednesday at Mexico Beach, Fla. as a strong category 4 system, with sustained winds of 155 mph.

Michael had the third lowest barometric pressure, 919 millibars, for a storm making landfall in the United States in recorded history.