Fire guts charter boat in Wanchese; no one hurt 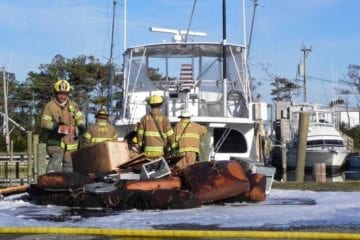 Pieces of the interior were piled dockside. (Rob Morris)

A fire on a charter fishing boat docked in Wanchese was put out quickly this morning but not before gutting the engine compartment and the cabin.

Jimmy Bliven, assistant chief with the Roanoke Island Volunteer Fire Department, was first on the scene and said keeping oxygen out of the engine compartment was key to preventing a bigger fire.

More help was called in, including additional crews from Roanoke Island, Nags Head and Colington.

Charred and melted cushions were piled on the dock after the fire, surrounded by foam and water used to put it out.

A window on the right side of the boat, Fishin Fannatic, was broken out. Fire and smoke left black streaks on part of the exterior.

Dare County Fire Marshal Steve Kovacs said it was too early to tell exactly how and where the fire started.