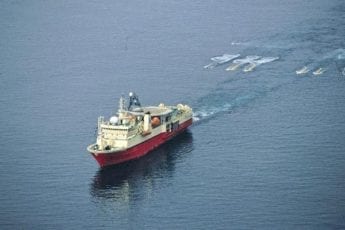 Already on record as opposing offshore drilling for oil and natural gas, the chairman of the Dare County Board of Commissioners and Nags Head’s mayor have sent out a letter protesting the National Marine Fisheries Service’s recent decision to approve seismic testing for undersea reserves.

Chairman Bob Woodard, who wrote the letter to media outlets with Nags Head Mayor Ben Cahoon, noted Monday that governors up and down the East Coast have objected to offshore testing and drilling. Coastal towns and counties have also rejected the idea.

Five companies will be testing in the same areas, he said, and even if no reserves are found, the process using sound waves threatens marine life.

“I would encourage you to continue to speak out,” Woodard said at today’s board meeting. “I know that our board is unanimous in opposition to this.”

Last week, the National Marine Fisheries Service gave its go-ahead for seismic surveys for oil and natural gas in the Atlantic, approving five companies for incidental harassment of marine mammals under the Marine Mammal Protection Act.

The service’s Incidental Harassment Authorizations require monitoring, reporting and mitigation to reduce the harmful effects on marine mammals. Observers will be on board survey vessels to listen and watch for marine life and alert operators if a protected species comes within a certain distance.

Restrictions will be placed on operations to eliminate or reduce the affects on sensitive species in their preferred habitats. Acoustic monitoring to detect marine mammal vocalizations will be required. Seismic operations are to be phased in gradually to alert animals in the area and reduce potential for exposure to intense noise. Shutdowns will be required when certain sensitive species or groups are observed.

The authorizations cover operations along the Atlantic Coast from Cape May, N.J., to Cape Canaveral, Fla.

In developing its requirements for the authorizations, National Marine Fisheries said it reviewed five separate applications from companies involved in geophysical surveys using airgun arrays in the Atlantic Ocean and listened to public feedback on both the applications and proposed authorizations.

In a conference call with reporters Friday, Donna Wieting, director of the National Oceanic and Atmospheric Administration’s Fisheries Office of Protected Resources, said NOAA Fisheries had done “a very thorough job” in reviewing public comments and responding to them.

The authorizations are valid for one year after an approved company notifies NOAA Fisheries, as required, that they are set to begin surveys. The latest expiration date for authorizations is Nov. 30, 2020.

Environmental advocates noted Friday that BOEM had previously denied permits based on the risks to marine life outweighing the value of any information to be gleaned from the surveys.

“This action flies in the face of massive opposition to offshore drilling and exploration from over 90 percent of coastal municipalities in the proposed blast zone,” said Diane Hoskins, campaign director at the group Oceana.

“These permits were already denied because of the known harm that seismic airgun blasting causes. President Trump is essentially giving these companies permission to harass, harm and possibly even kill marine life, including the critically endangered North Atlantic right whale — all in the pursuit of dirty and dangerous offshore oil. This is the first step toward offshore drilling in the Atlantic and we’re going to make sure coastal communities know what’s happening and fight this.”

Oceana announced it had launched an interactive “We’re Watching” map to track seismic vessels in near real-time off the East Coast.

Also, the Business Alliance for Protecting the Atlantic Coast, which represents more than 42,000 businesses and 500,000 commercial fishing families from Maine to Florida, condemned the action.

“The Outer Banks business community depends on a clean and beautiful coast to support our multi-billion-dollar tourism, recreation and fishing industries,” said Karen Brown, president and CEO of the Outer Banks Chamber of Commerce and also a member of the alliance. “The release of these permits puts us one step closer to oil-covered beaches and economic disaster.”