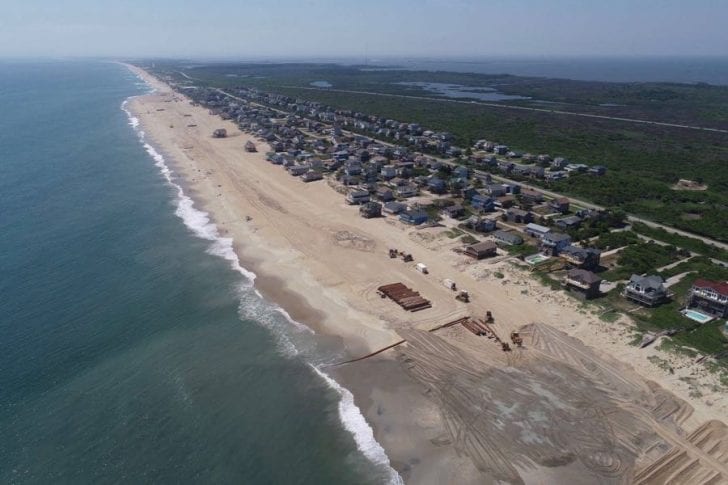 Adding more sand to 10 miles of the beach in Nags Head will take a little longer than expected and is now scheduled to be finished in September. Pumping by the dredge Ellis Island is done at the south end of town and bulldozers are wrapping up work near the the Cape Hatteras National Seashore.

One of the dredges will be leaving earlier than expected to start work on another job, according to an update from the Town of Nags Head.

Town officials have emphasized that the schedule is changeable. Plans had called for work to continue for 90 to 120 days, as late as October, but there was some optimism for an earlier completion, which could still happen.

The original project in 2011 was finished by the end of August, well ahead of schedule.

About 4 million cubic yards of sand will be pumped by Great Lakes Dredge and Dock Co. from offshore borrow areas under a $42.7 million contract.

Up to half the visible sand will slide into the nearshore to create a protective slope, according to coastal engineers. Work is being done at this time of the year to avoid risks and delays from unpredictable winter weather.

Here’s the latest update from the town:

The project’s completion date is now sometime in September, due to the Dredge Ellis Island leaving our area early to work on another project.

The Dredge Ellis Island has finished nourishing the beach from her landing point just south of Limulus Street south to the town line with Cape Hatteras National Seashore. Construction has been making progress north of the landing point.

The Ellis Island will leave for refueling on Friday evening, May 24,. The dredge is expected to return on Sunday, May 26, in the mid-afternoon. A pedestrian corridor on the back beach will be installed along the construction area while the dredge is out of the area for refueling.

While the Ellis Island is refueling, bulldozers will re-dress areas in the south end of the project.
The Ellis Island will continue to work the project until about the second week of June when the dredge will leave the area for another project. The dredge is expected to complete nourishment to about 500 feet north of the Outer Banks Pier near Mile Post 18.5. The Dredge Liberty Island will complete the remaining project area north of the Outer Banks Pier by about September.

The Dredge Liberty Island is expected to begin work the week of May 27 from a landing point just south of Curlew Street near Mile Post 11.5.

The Liberty Island will then work off of other landing points installed south of the Curlew landing point, eventually making her way south towards Outer Banks Pier, to tie into the beach that was nourished by the Dredge Ellis Island.

As background, an offshore dredge pumps sand from its hold (or hopper) through submerged pipes that terminate at a landing point on the beach. From each landing point, pipes typically extend north and south about 500 feet each way. Once about 1,000 feet of beach is nourished, the dredge will have to connect to another landing point to repeat the process.

NOTE – Parking at the Forrest Street beach access will be closed for the duration of the project. The parking lot at the Juncos Street public beach access is expected to be re-opened in mid to late June. Pedestrian access at both sites is still permitted. Lifeguard stands are in place but may be moved a few feet to accommodate construction traffic.