WHAT TO WATCH ON TV
Stream On: When the unthinkable happens, at the WTC and Chernobyl

Back in the day, for the unthinkable to occur required the agency of nature—earthquakes, hurricanes, tornadoes, volcanoes. But we’re in the age of technology and can now put nature to shame. 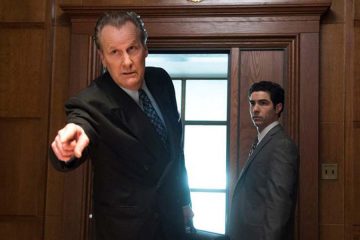 John O’Neill, the chief of the New York FBI’s Counterterrorism Center, is convinced that the United States has been targeted for attack by al-Qaeda but is faced with hostility from other federal agencies in ‘The Looming Tower.’ (Hulu)

Twenty years ago, four commercial airliners traveling from Boston, Newark and the District of Columbia were hijacked mid-flight by 19 al-Qaeda terrorists, and used essentially as bombs against three targets: the World Trade Center in Manhattan, which was leveled, the Pentagon in Virginia, which was damaged, and presumably either the Capitol or White House in Washington, D.C. (this plane was crashed by the hostages in Pennsylvania).

One of the consequences of this deadliest terror attack in human history was the creation of the Department of Homeland Security, under which information from dozens of federal agencies would be coördinated, to avoid a repetition of the insular behavior that left us open to attack.

The Looming Tower opens on a 9/11 inquiry in 2004. Ali Soufan (Tahar Rahim), a Lebanese-American FBI agent, is testifying, and recalling 1998, when he was recruited by John O’Neill (Jeff Daniels, Gettysburg), for O’Neill’s I-49 Counterterrorism Center in New Yoek.

I-49 had two observers in Alec Station (CIA), headed by Martin Schmidt (Peter Sarsgaard, The Killing), which was dedicated to tracking Osama Bin Laden (UBL), but because of an apparent personal conflict between Schmidt and O’Neill, they are frozen out and kept from Alec Station’s UBL intelligence.

The action switches from the private lives of O’Neill and Soufan (who is an executive producer of The Looming Tower) to the interoffice politics of the two centers, and to the American Embassy in Naibobi, Kenya, which is bombed by terrorists simultaneously with the embassy in Tanzania.

We meet veteran FBI agent Robert Chesney (Mike Camp, Boardwalk Empire), who has a personal stake in the Kenya bombing, and dedicates himself to the case with brilliant interrogation skills; the National Coordinator for Security, Infrastructure Protection, and Counterterrorism Richard Clarke (Michael Stuhlbarg, A Serious Man), who advocates for O’Neill; CIA Director George Tenet (Alec Baldwin, 30 Rock); and soon, Mohamed Atta, Khalid al-Mihdhar and Nawaf al-Hazmi, future 9/11 hijackers. A child survivor of the CIA-initiated cruise-missile strikes on an al-Qaeda training camp walks to the next camp to sign up and participates in the bombing of the U.S.S. Cole.

For a ten-episode miniseries, The Looming Tower is epic in scope with great performances by the principals, an understandable story and a gripping climax. (The Nairobi and U.S.S. Cole bombings are depicted; the 9/11 attacks happen offscreen in the last episode.) It’s won many awards and I highly receommend it. 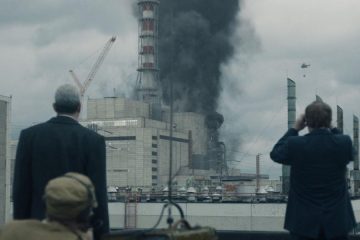 When Deputy Council of Ministers Boris Shcherbina and Deputy Director of the Kurchatov Institute Valery Legasov arrive in Pripyat, Ukraine, they see that the core of the Chernobyl nuclear reactor has exploded, and radiation is already entering the atmosphere. (HBO)

“What is the cost of lies?

“it’s not that we’ll mistake them for the truth—the real danger is that if we hear enough lies, then we no longer recognize the truth at all.

“…Well, I’ve given you everything I know. They’ll deny it, of course. They always do. I know you’ll try your best.”

Valery Legasov (Jared Harris, Mad Men), the deputy director of the Kurchatov Institute in the USSR, puts down the mic and collects the tape he has just recorded with several others, wrapping them in newspaper and leaving them in a dead drop outside of his Moscow apartment, evading a KGB watcher. He returns to his apartment, puts out four bowls of food for his cat, and hangs himself.

Two years before, in 1986, the worst nuclear disaster in history occurred in the Ukrainian Soviet Socialist Republic. It threatened to involve the whole European continent. It happened during a routine safety test, and was exascerbated by hubris and a lack of communication among several soviet agencies.

The story begins with an explosion at the power plant during a safety test. Deputy Chief Engineer Anatoly Dyatlov, when told that the actual nuclear core has exploded, is in denial. Across town, Lyudmilla Ignatenko, wife of fireman Vasily Ignatenko, sees the glow in the night, and a beam of blue light rising into the sky.

They receive a phone call; Vasily must report. Lyudmilla is concerned; Vasily is dismissive, but when his fire department shows up on the scene, he becomes anxious at the spectacle and phenomena they’re experiencing: the firemen can taste metal and those who get nearest are receiving skin burns without coming into contact with anything.

In Vasily’s neighborhood, the locals watch from a pedestrian bridge, while their children delight from the apparent snowflakes piling up at their feet. “It is beautiful,” one says. The series postscript informs us that they all died.

Valery Legasov is recruited by Deputy Minister Boris Shcherbina to help find a way out of the impossible situation and they face an uphill battle against the secretive Soviet state.

Chernobyl is an unforgettable display of the unprecedented horrors that can be cooked up by humans—and the incredible heroism that those same humans can show in their face.

Next time, From the writers of Seinfeld, Curb Your Enthusiasm and … Dilbert?